The spirit of philanthropy was on full display at the 2014 Inova Summit: A Thought Leadership Weekend as
Inova Loudoun Hospital Foundation celebrated the overwhelming success of its Cornwall Cares Campaign, which raised more than $4.5 million for the Emergency Department at the Cornwall campus in downtown Leesburg. During a cocktail reception at Salamander Resort in Middleburg, Loudoun County residents and Inova Loudoun Hospital leadership gathered to enjoy fine food and fellowship in the beautiful Equestrian Center.

The Cornwall campus is known as the “Crown Jewel of Loudoun County” by generations of families, and was the site chosen for the first major expansion from Inova's original location on Market Street in downtown Leesburg. As part of the Inova Promise — “to meet the unique needs of each person we are privileged to serve” — the Cornwall Cares Campaign was launched in January 2011 to provide much needed renovations to the emergency facilities there.
The new Emergency Department at Cornwall would not have been possible without the generosity of Mike and Teresa Wheeler, longtime Loudoun County residents. The Wheelers were grateful for the care that Teresa’s father received during treatment for COPD at Inova Loudoun Hospital. Inspired to honor the nurses who treated him like a member of their own family, the Wheelers donated $1.5 million to the campaign — one of the largest one-time gifts in the hospital's history — in honor of Teresa’s parents, Richard and Joann Lynch. To inspire the community to contribute, the couple offered an additional challenge grant of up to $500,000 in matching gifts. That match was successfully met by the community.

Thanks to the philanthropic efforts of the Wheelers and other residents of Loudoun County, including Mark and Brenda Moore, The Ladies Board, Commonwealth Emergency Physicians, Fortessa and the Hamberger Family, the Rust Family and the Emmet Family, the new Emergency Department at Cornwall is one of the most state-of-the-art departments in the region, rivaling major metropolitan facilities. 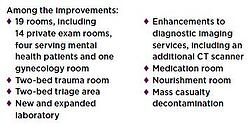 In addition, the medical records from the Emergency Department at Cornwall are part of the Inova EpicCare system and linked to all other Inova facilities, ensuring higher-quality patient care, regardless of where the patient is seen. Also, there is free ambulance transport between Cornwall and the  campus if a patient needs further observation or requires inpatient admission.

During the Cornwall Cares Campaign reception, Edward Puccio, MD, Chair of the Board of Trustees of Inova Loudoun Hospital Foundation, reflected on the impact of philanthropy: “As I look back at the planning and building of this facility, the most satisfying aspect of this endeavor has been the relationship forged among all of us, from the Foundation to Inova senior management to our most generous donors,” he said. “I continue to describe this as a labor of love, and, as such, feel we have achieved an even stronger bond with the Loudoun community as a result of this endeavor.”

The Inova Tribute Dinner held during the Summit also honored the Wheelers, who were presented with the 2014 Inova Building Our Legacy Award. During the remainder of the weekend, Inova brought together a vast array of philanthropists, physicians, healthcare experts and community leadership to engage in thought-provoking dialogue about the most critical healthcare challenges of the day. Discussions centered around topics such as the Affordable Care Act; living a better and more fulfilling life by utilizing personal and predictive medicine; and the important role that simulation training plays in improving the quality of care and, ultimately, the patient experience.

Summit attendees were treated to a luncheon keynote address by Dr. Sanjay Gupta, CNN chief medical correspondent and New York Times best-selling author, who shared his insights on not only living a longer life, but living a better and more fulfilling life At Inova, we believe that our margin of excellence is fulfilled by philanthropic investment from the community. We are grateful for the continued support we receive to provide excellent care to all we have the pleasure to serve. - Source: inova.org/ilh

Puccio is a founding partner of Commonwealth Emergency Physicians (CEP), an independent, physician-owned group, that provides emergency services at Inova's Lansdowne and Cornwall campuses. CEP has been a client of EMrecruits since October 2000.