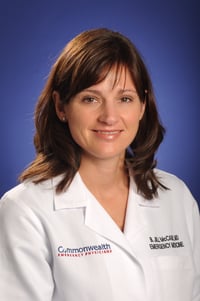 LEESBURG, VA -- Jill McCabe, MD, an accomplished Leesburg pediatrician and community leader, has announced that she will seek the Democratic nomination for State Senate in Virginia's 13th District, located in Loudoun and Prince William counties. Dr. McCabe has years of professional experience in healthcare as the Medical Director of Pediatric Emergency and Pediatric Hospital Services with Commonwealth Emergency Physicians at Inova Loudoun Hospital.
"I'm running for Senate because I am inspired by the idea of making a greater impact in our community," said Dr. McCabe. "Healthcare, public policy and business are intersecting now more than ever. I believe that my experience as a health professional, a working mother and an education leader have helped prepare me to tackle the challenges facing the Commonwealth today. From affordable healthcare to full-day kindergarten, we have a responsibility to give our children the very best Virginia has to offer."
Dr. McCabe, a Democrat and mother of two, is challenging Republican Senator Dick Black, who has earned a reputation in the General Assembly as a far-right ideologue. He's pushed legislation to ban same-sex couples from adopting children, argued that sexual assault in the military was "as predictable as human nature," and has consistently tried to legislate women's medical decisions. Black's positions consistently fall outside of mainstream Virginia values.
Dr. McCabe currently holds several leadership positions in the area, including her roles as the Vice President of the Medical Staff at Inova Loudoun Hospital and Chair of the Loudoun Country Day School Board of Trustees. She announced her candidacy last week at a meeting of local Democrats and has already received enthusiastic support both in the area and from statewide Democrats Governor McAuliffe, Lieutenant Governor Ralph Northam and Attorney General Mark Herring. Additional information on her campaign is forthcoming.
*  *  *
EMrecruits provides recruiting services to Commonwealth Emergency Physicians. If you are open to new opportunities, be sure to learn more about the available pediatric emergency medicine jobs in Leesburg, Virginia.