Physician Burnout: How To Identify It As An Emergency Physician

Physician Burnout: How To Identify It As An Emergency Physician 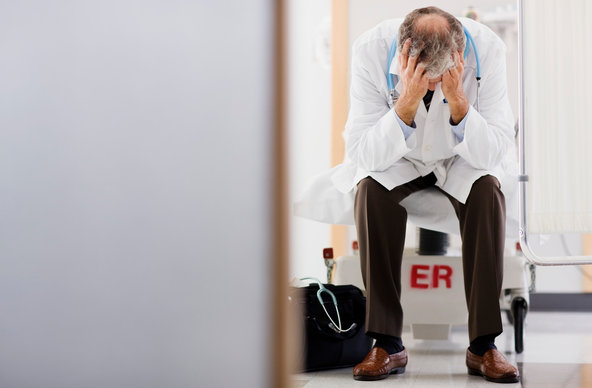 According to an article from the Archives of Internal Medicine, physicians on the front line of patient care experience a higher rate of burnout than other medical specialties. This includes family medicine, general internal medicine, and emergency medicine.

The Maslach Burnout Inventory (MBI) has been recognized for more than a decade as the leading measure of burnout. The MBI Surveys address three general scales:

Let's look at each of these scales individually.

Dr. Michelle Finkel, explains this well in her 2013 KevinMD article, Why Are Emergency Physicians are Burning Out?

"With regard to nights, there is no question that the erratic schedule that full-time emergency physicians manage is exhausting. Shift work has been associated with health problems, including an increased risk of diabetes, depression, heart disease, and breast cancer. It also adversely affects one’s personal life, a problem that may be heightened if someone has a partner and children. Again, though, early in a medical career – when someone is in her twenties – these issues may not be pressing, depending on one’s physical and family state. It’s hard to envision preschool carpools and community barbecues when you are still pulling all-night drives to Vegas on your weekend off."

How would you rate your level of emotional exhaustion on a scale of 1 (unaffected) to 10 (extremely affected)?

A 2010 study in The Journal of Medicine and Life suggests that possible explanations for depersonalization among emergency physicians might be linked to high patient flow, Emergency Department crowding, long work hours and individual parameters such as coping mechanisms, social development and work environment.

According to a 2015 study in West J Emergency Medicine, resident physicians are significantly more likely to report high scores in the depersonalization subscale of the MBI than attending physicians. They offer this explanation of their findings:

"We suspect EM residents may experience higher rates of depersonalization due to the fact they on average work more clinical hours than EM attendings at the two sampled academic training sites. In addition resident physicians at these sites are charged with the role of interfacing primarily with admitting services, consultants and ancillary staff to a greater extent than attending physicians. As such resident physicians may experience greater exposure to negative, cynical or dehumanized attitudes about patients."

How would you rate your level of depersonalization on a scale of 1 (unaffected) to 10 (extremely affected)?

According to the 2015 Medscape article, Physician Burnout: It Just Keeps Getting Worse, some studies have suggested that a low sense of personal accomplishment is not associated with burnout, at least in men.

Other studies show that a positive screen for depression was significantly associated with higher rates of burnout. Burnout is related to depression, although the two are not synonymous. Whereas depression affects an individual globally, burnout is specifically related to one’s work. While research on rates of depression among EM residents is limited, rates of depression among attending physicians, according to West J Emergency Medicine, are comparable to those in prior studies of emergency physicians and their study demonstrated a significant association between burnout and low career satisfaction.

How would you rate your level of low personal accomplishment on a scale of 1 (unaffected) to 10 (extremely affected)?

Looking for ways to avoid burnout?

The American College of Emergency Physicians (ACEP) is kicking off their inaugural EM Wellness Week January 24-30, 2016. It's a great opportunity for all emergency physicians and their colleagues to take the time to self-renew while staying dedicated to the highest quality patient care.

If emotional exhaustion caused by night shifts is playing a factor in your burnout, check out our article on easing transition and improving productivity after a night shift.